TL;DR: I prepared 5 puzzles about statistics that should be accessible to anyone without being trivial. Scroll down for the puzzles.

“Data science is statistics on a Mac”

Then there is the famous Venn diagram with data science on the intersection of statstics, hacking and substantive expertise.

And yet, I can’t remember a single time when I got to solve an integral on the job (and believe me, it’s not for lack of trying). I spent a total of maybe a week in the last 3 years explicitly thinking about statistical tests. Sure, means and medians and variances come up on a daily basis but it would be setting the bar extremely low to call that ‘doing statistics’. 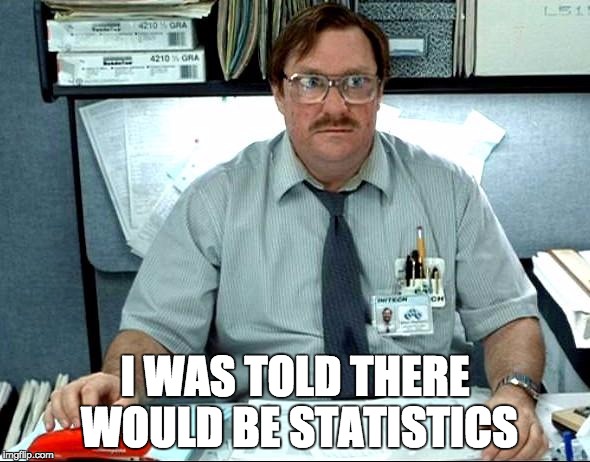 The other kind of statistics

But maybe this is the wrong way to think about it. Maybe my problem is that I was expecting mathematical statistics where I should have been expecting real world statistics.

Mathematical statistics is a branch of mathematics. Data scientists like to pretend they do it, but they don’t.

In my defense, it was an easy mistake to make. Mathematical statistics is what is taught in most courses and textbooks. If any statistics questions come up in a job interview for a data science role - it will be the mathematical variety.

To illustrate what I mean by ‘real world statistics’, to show that this discipline is not trivial and is interesting in its own right, I prepared a short quiz. There are 5 questions. None of them require any complicated math or any calculations. They do require a good mathematical intuition though.

I encourage you to try to solve all of them yourself before checking the answers. It’s easy to convince yourself that a problem is trivial after you’ve read the solution! If you get stuck though, every question has a hint below.

According to CDC data, US counties with the lowest incidence of kidney cancer happen to all be rural, sparsely populated and located in traditionally Republican states. Can you explain this fact? What does it tell us about the causes of cancer?

According to a series of interviews conducted with people who have been in a bar fight, 9 out of 10 times, when someone dies in a bar fight, he was the one who started it. How can you explain this remarkable finding?

According to studies the average number of sex partners Britons have had in their lives is 9.3 for men and 4.7 for women. How can those numbers possibly be different? After all, each time a man and a woman become sex partners, they increase the total sex partners tally for both sexes by +1. Find at least 5 different factors that could (at least in theory) account for the difference and rate them for plausibility.

The same thing is true of counties with the *highest* incidence of kidney cancer.

According to interviews. Hint, Hint.

Think about where did the sample come from.

What if the students were sports teams from a weaker and a stronger league?

Get your mind into the gutter for this one!

It tells us nothing about causes of cancer, it’s a purely statistical effect and it has to be this way. Sparsely populated counties have less people in them, so sampling error is higher. That’s it. Think about an extreme case - a county with a population of 1. If the only inhabitant of this county gets kidney cancer, the county will have 100% kidney cancer rate! If this person remains healthy instead, the county will have cancer incidence rate of 0%. It’s easier for a small group of people to have extremely high or extremely low rate of anything just by chance. Needless to say, republicanism has nothing to do with cancer (as far as we know) - it’s just that rural areas are both sparsely populated and tend to lean Republican. 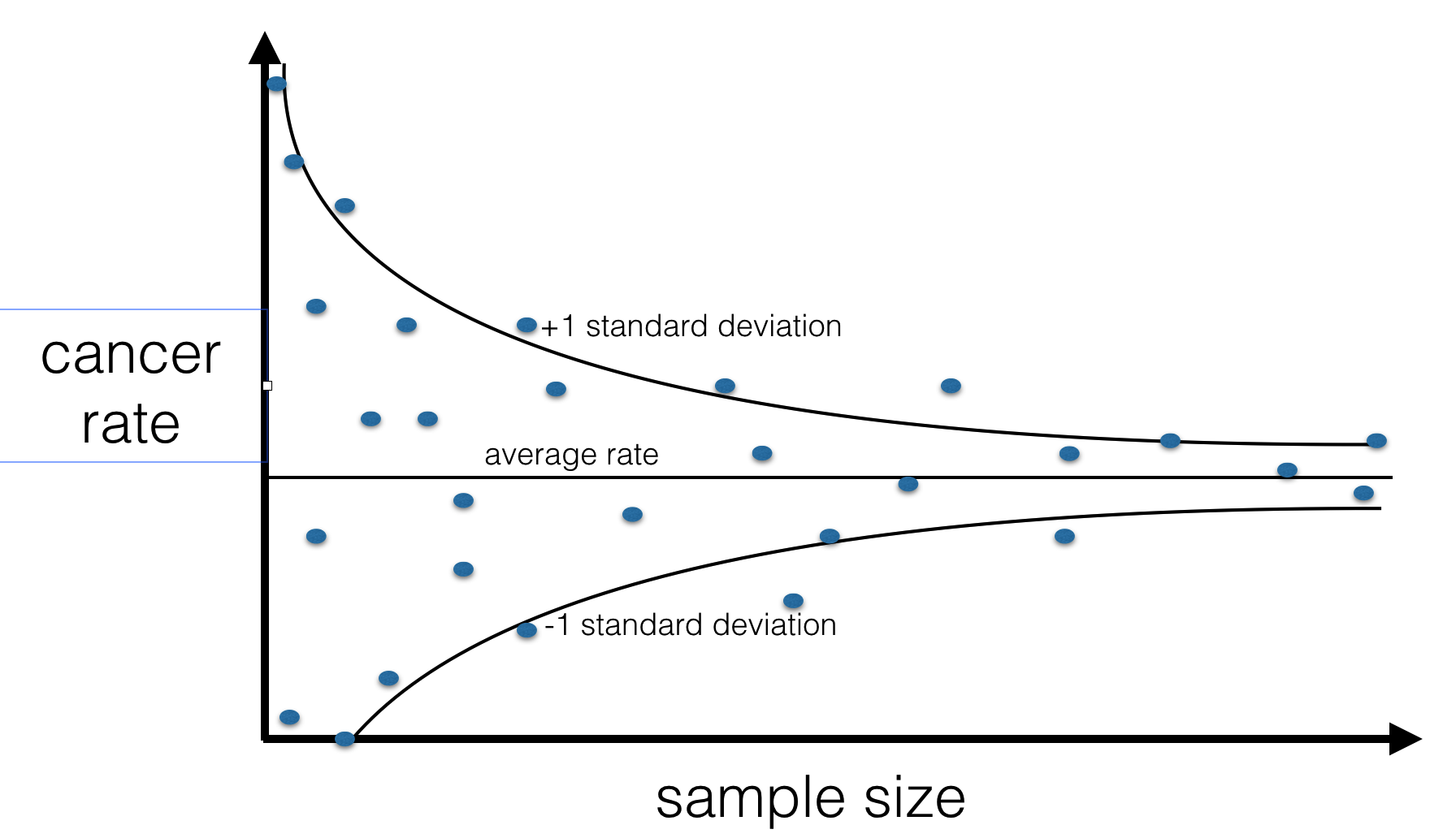 This example comes from Daniel Kahneman’s awesome book Thinking Fast And Slow. This blog post has a really nice visualisation of the actual CDC data that illustrates this effect.

People lie. Of course the dead one will be blamed for everything!

This one is slightly more subtle. It is not inconceivable that being a Programming Competition Winner (PCW) makes one less likely to be a Good Engineer (GE). But this is not the only and IMO not the most plausible explanation of the data. It could very well be that in the general population there is no correlation between GE and PCW or a positive correlation and the observed negative correlation is purely due to Google’s hiring practices. Imagine a fictional hiring policy where Google only hires people who either won a competition (PCW) or are proven superstar engineers (GE) - based on their open source record. In that scenario any engineer working at Google who was not a PCW would automatically be GE - hence a negative correlation between GE and PCW among googlers. The correlation in the subpopulation of googlers may very well be the opposite of the correlation in the entire population. Treating PCW as a negative in hiring programmers would be premature. 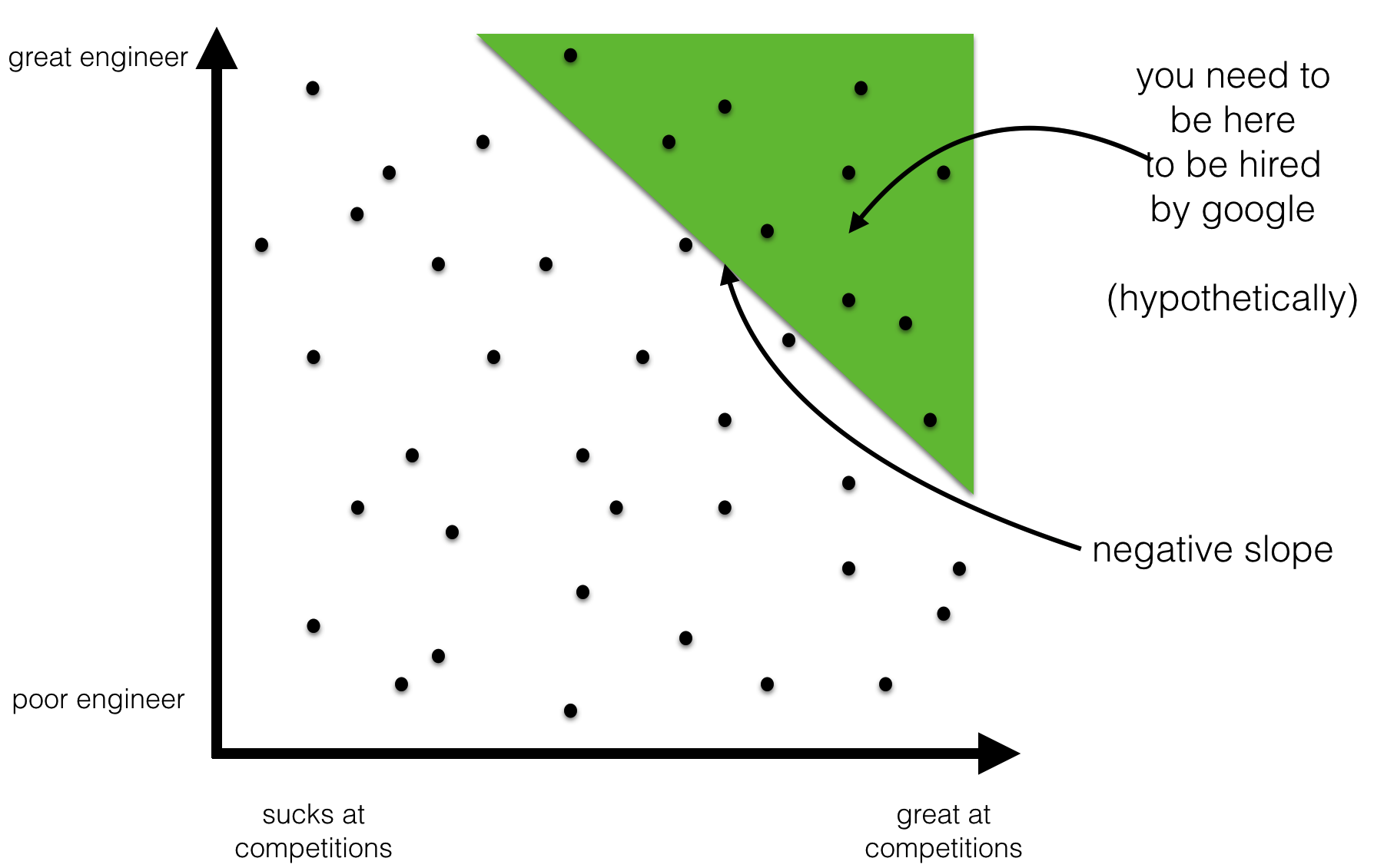 Erik Bernhardsson has a post with nice visual illustration of this phenomenon (which is an of Berkson’s Paradox). The same principle also explains why all handsome men you date turn out to be such jerks.

The underprivileged student should be expected to do worse. The reason is simple - the admissions test is a measure of ability but it’s not a perfect measure. Sometimes students score lower or higher than their average just by chance. When a student scores higher/lower than expected (based on demographics and whatever other information you have) it is likely that the student was lucky/unlucky in this particular test. The best estimate of the student’s ability lies somewhere between the actual test score and our prior estimate (which here is based on the demographics).

This effect is an example of regression to the mean and it is known as Kelley’s Paradox. This paper illustrates it with figures with actual data from SAT and MCAT exams. You will see that the effect is not subtle!

The reason we think $MSP$ and $FSP$ should be equal is that every time a man and a woman become sex partners, the numerators of both $MSP$ and $FSP$ increase by $+1$. And the denominators are approximately equal too. Let’s list all the ways this tautology breaks down in real life:

And there are other factors as well, although it’s not clear to me which way would they tend to bias the ratio: