In the last post I presented a way to do Bayesian networks with pymc and use them to impute missing data. This time I benchmark the accuracy of this method on some artificial datasets.

In the previous posts I showed the imputation of boolean missing data, but the same method works for categorical features of any cardinality as well as continuous ones (except in the continues case additional prior knowledge is required to specify the likelihood). Nevertheless, I decided to test the imputers on purely boolean datasets because it makes the scores easy to interpret and the models quick to train.

To make it really easy on the Bayesian imputer, I created a few artificial datasets by the following process:

With data generated by the same Bayesian network that we will fit to it, we’re making it as easy on pymc as possible to get a good score. Mathematically speaking, the bayesian model is the way to do it. Anything less than optimal performance can only be due to a bug or pymc underfitting (perhaps from too few iterations).

The first dataset used is based on the famous wet sidewalk - rain - sprinkler network as seen in the wikipedia article on Bayesian networks.

The second, bigger, is based on the LUCAS network 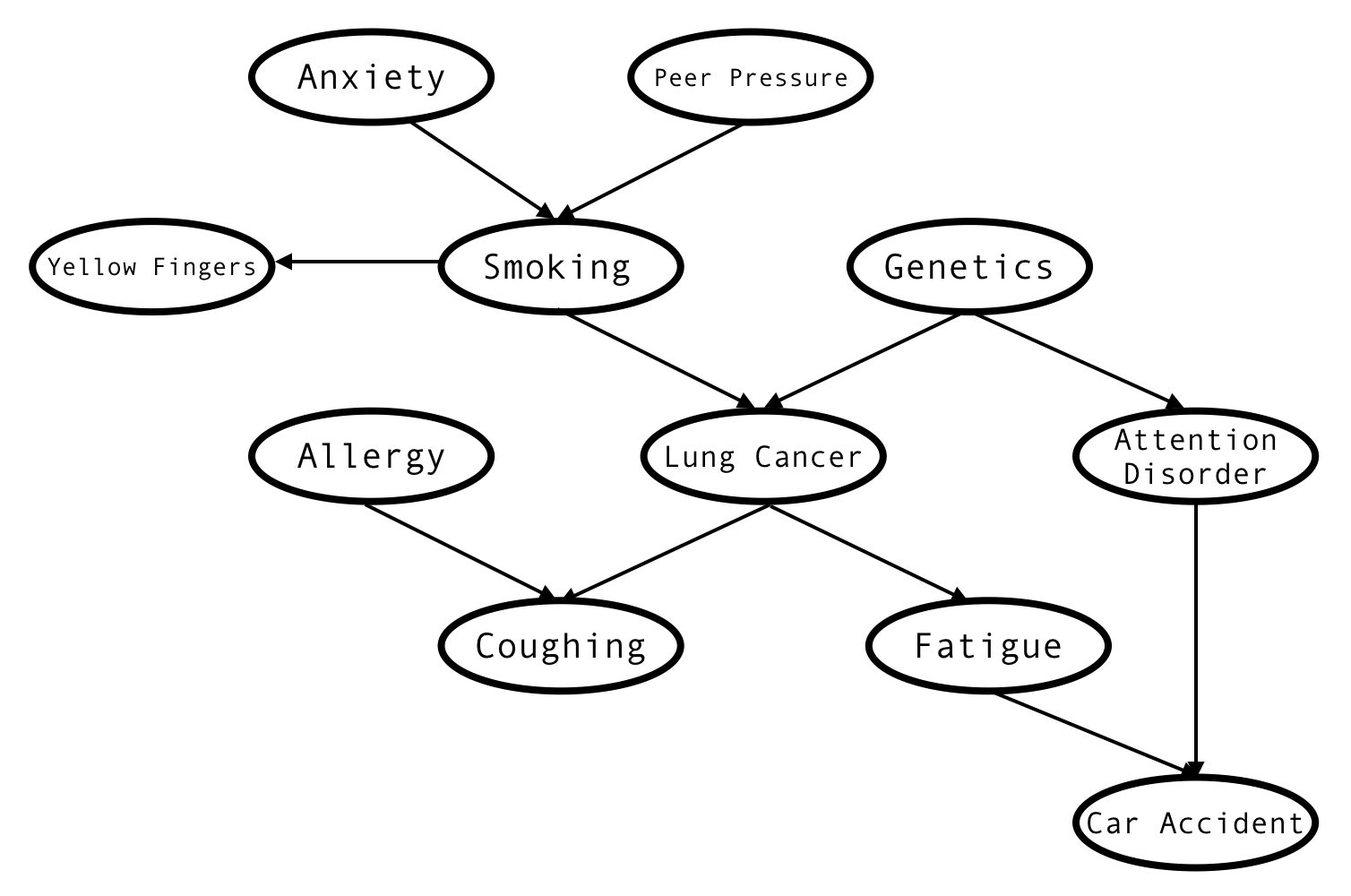 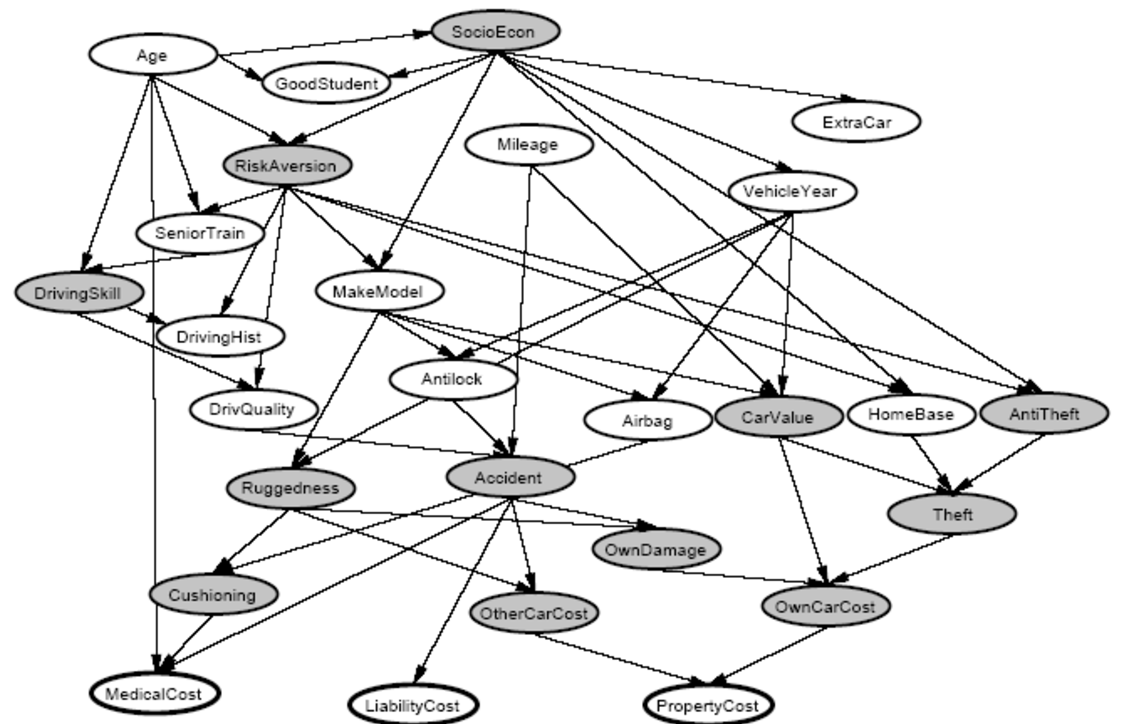 For each of these networks I would generate a dataframe with 10, 50, 250, 1250 or 6250 records and drop (replace with -1) a random subset of 20% or 50% of values in each column. Then I would try to fill them in with each model and score the model on accuracy. This was repeated 5 times for each network and data size and the accuracy reported is the mean of the 5 tries.

The following models were used to impute the missing records:

Let’s start with the simplest network: 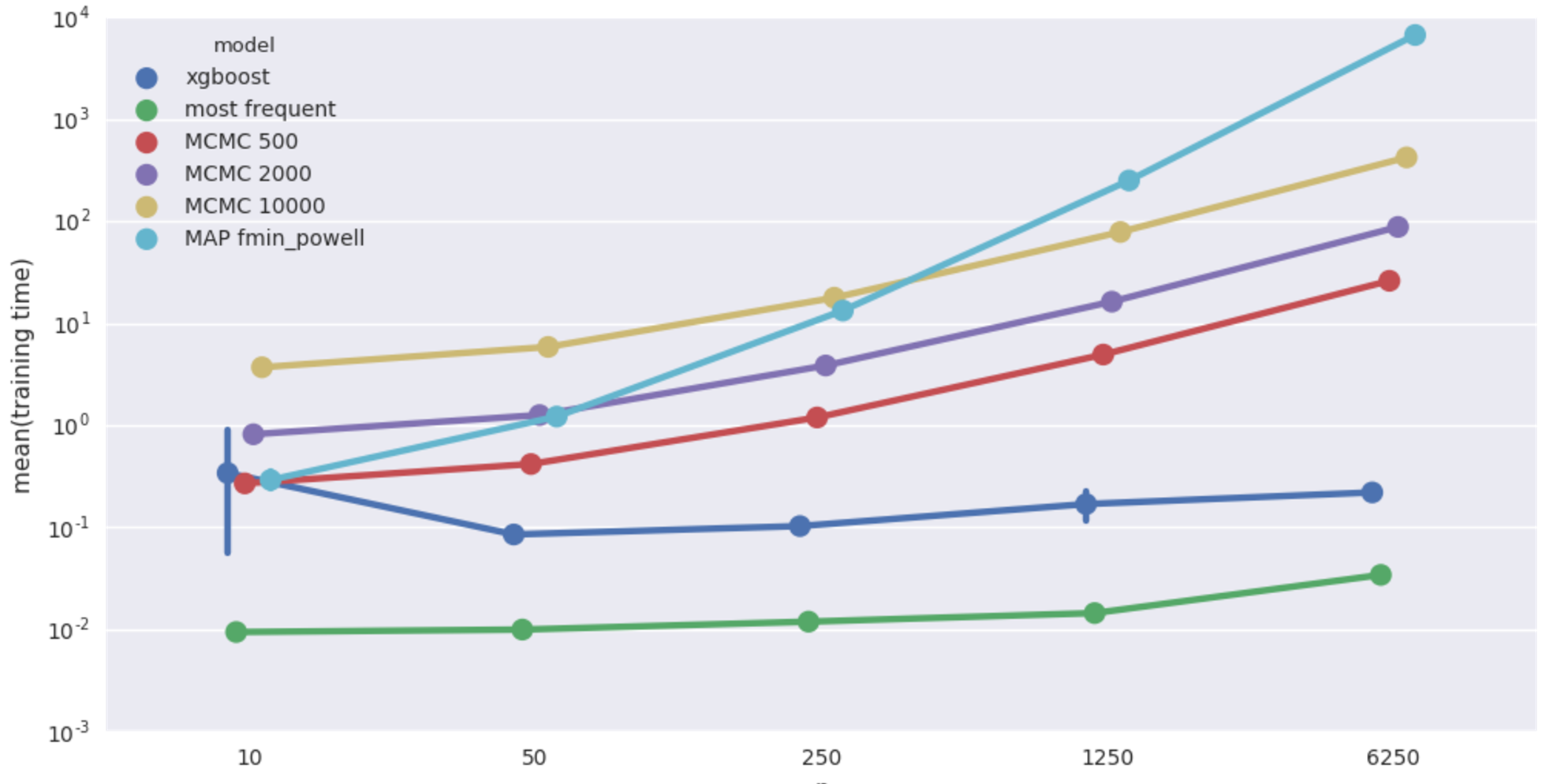 XGBoost comes out on top, bayesian models do poorly, apparently worse than even most frequent imputer. But variance in scores is quite big and there is not much structure in this dataset anyway, so let’s not lose hope. MAP fmin_powell is particularly bad and terribly slow on top of that, dropping it from further benchmarks.

Let’s try a wider dataset - the cancer network. This one has more structure - that the bayesian network knows up front and xgboost doesn’t - which should give bayesian models an edge. 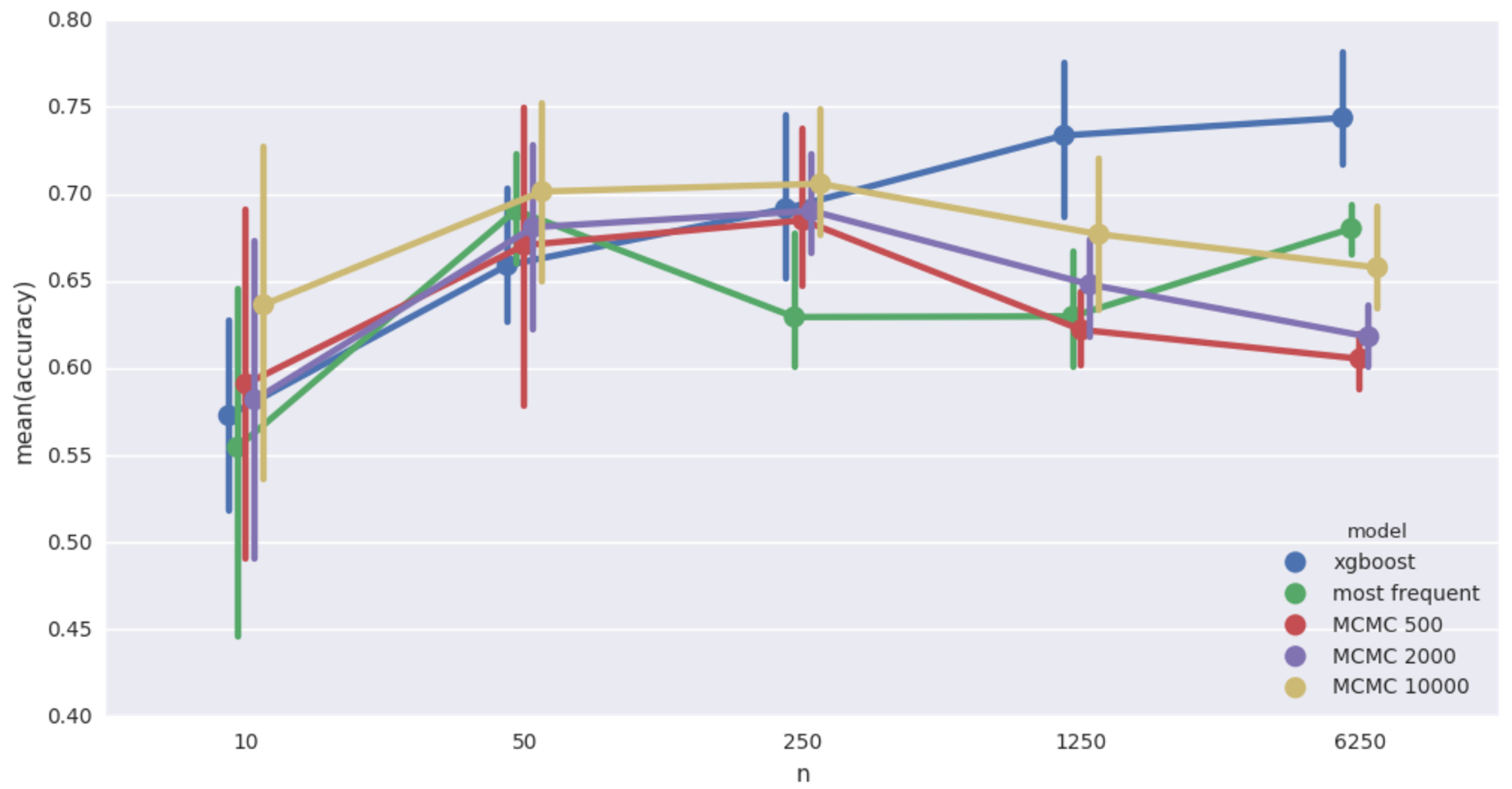 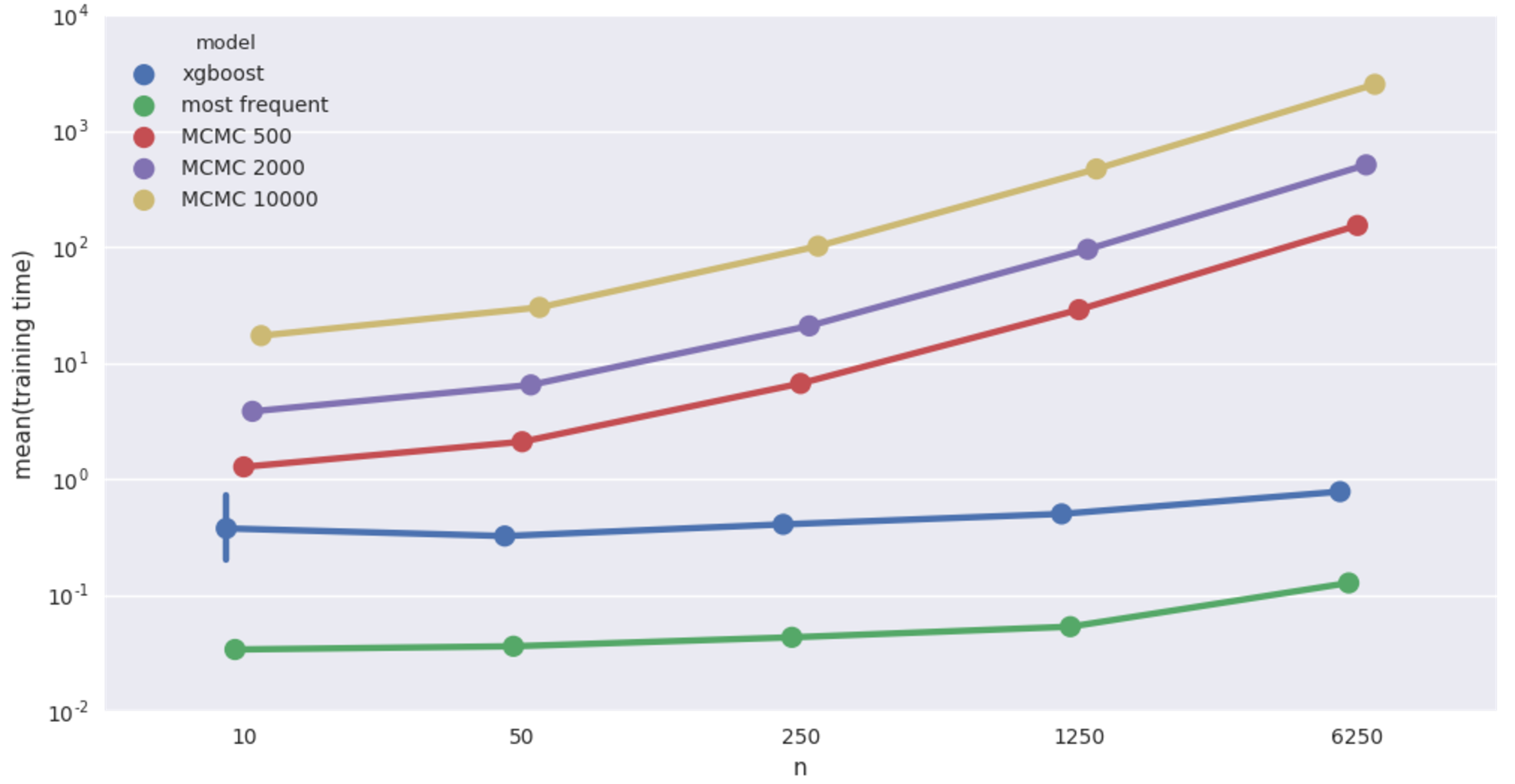 That’s more like it! MCMC wins when records are few, but deteriorates when data gets bigger. MCMC models continue to be horribly slow. 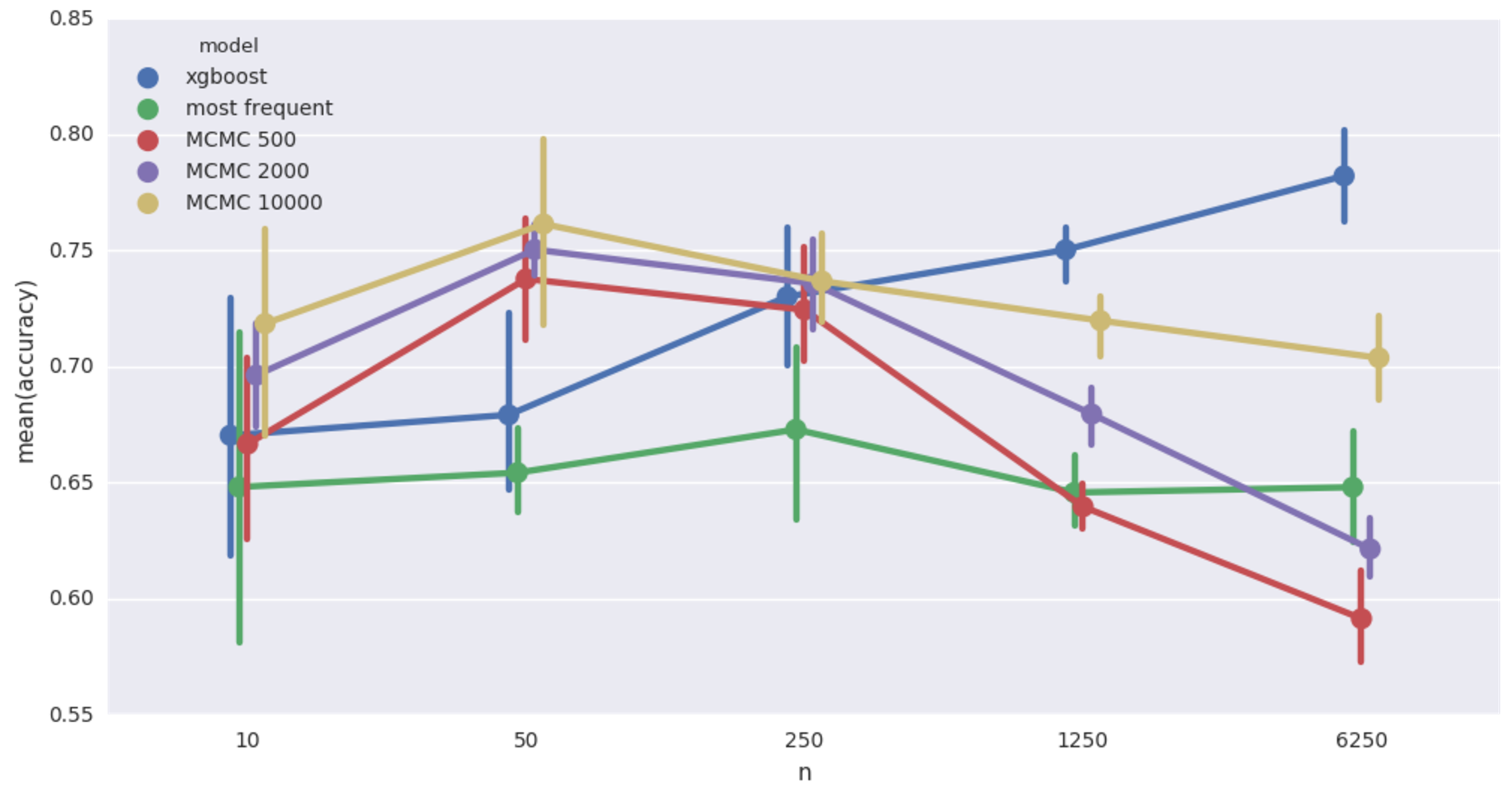 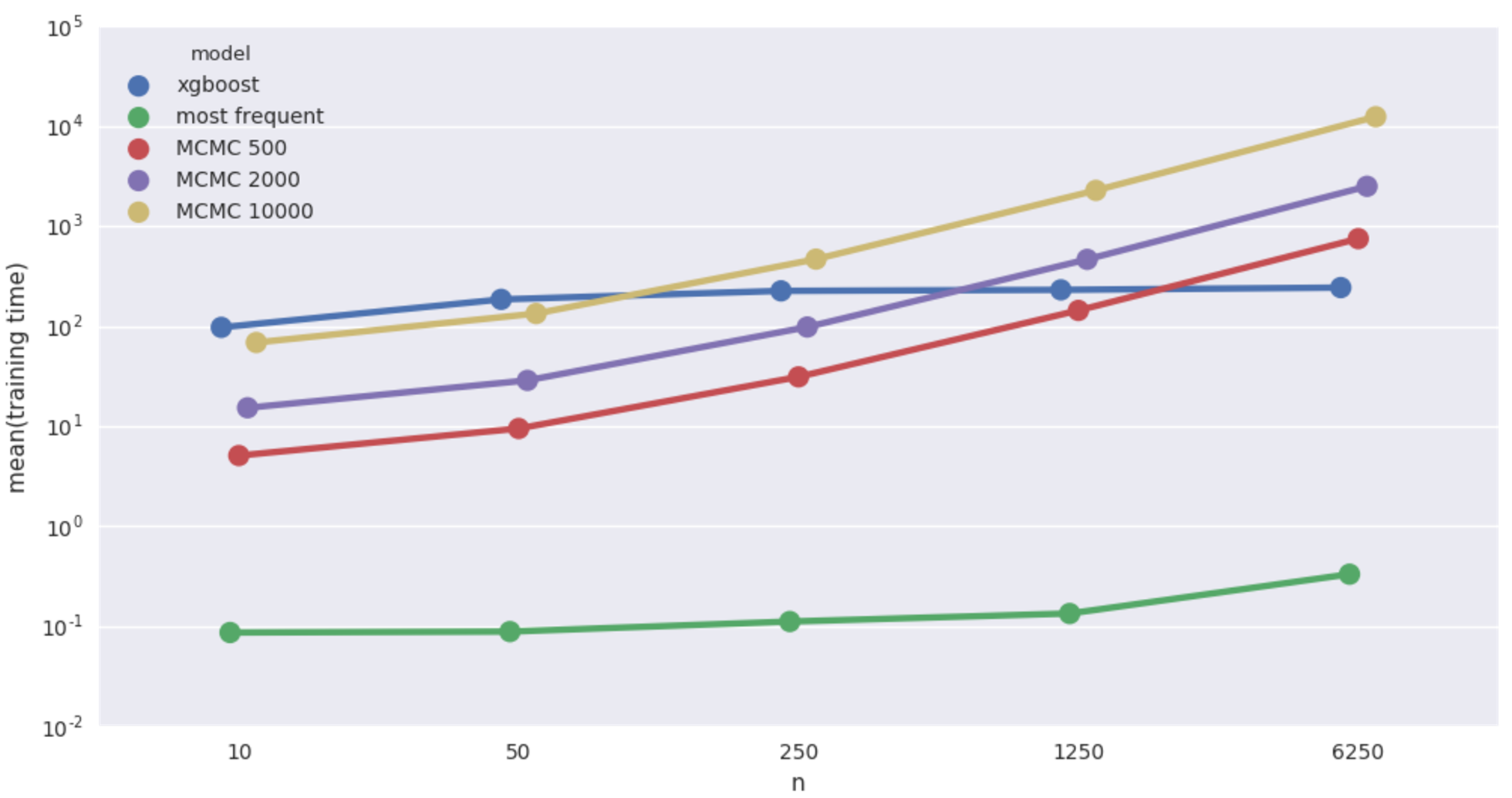 Qualitatively same as the cancer network case. It’s worth pointing out that in this case, the Bayesian models achieve at 50 records a level of accuracy that XGBoost doesn’t match until shown more than a thousand records! Still super slow though.

What have we learned?

Overall, I count this experiment as a successful proof of concept, but of very limited usefulness in its current form. For any real world application one would have to redo it using some other technology. pymc is just not up to the task.