How do you train a binary classifier when you have only positive-labeled training examples? Impossible? Maybe. But sometimes you can do something just as good. Let’s start from the beginning…

Everyone and their mum in the b2b sector is trying to use machine learning for lead generation. For our purposes lead-gen means selecting from the millions of active companies in your country the ones that are most likely to buy your product once contacted by your sales team. Needless to say lead generation is extremely serious business and constitutes a market sector in its own right - a type of b2b2b if you will.

One popular lead-gen strategy is to look for leads among companies similar the ones that have worked out for you in the past. A machine learning implementation of this strategy is straightforward:

An interesting difficulty frequently arises when you try to apply this approach in real life. Sales teams usually have good records on their clients but often fail to keep track of all the prospects that didn’t work out. As a result, you end up with only positive examples to train your classifier on. It’s not possible in general to train a classifier on a training set with one class amputated this way. But…

TL;DR = divide density of “good points” by density of all - this is the lead score

Keep in mind that:

A solution will present itself once the problem is stated in mathematical terms. Consider the space of all possible company features $X$. Given are:

This is how it looks in an artificial 1-D dataset. 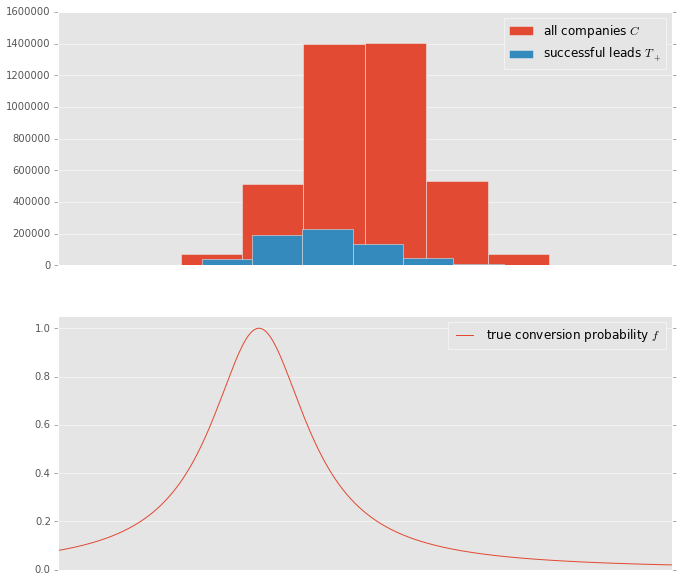 It’s useful to think of $C$ as a sample from some probabilty distribution $P(x)$ defined on $X$. Or to express the same in the language of point densities in space:

Since a company’s chance of testing positive is $f$, the density of companies that tested positive is simply:

The set $T$ is hidden from us but $C$ and $T_+$ are available so we can use them to find $f(x)$. Combining the first and third equation we get:

This is it. If we can just estimate the densities of $C$ and $T_+$ - we’re golden. Their ratio gives the $f$ function up to a constant, which is all we need to do lead scoring. There are many ways to do density estimation in practice:

This is how it looks on our toy dataset:

Unsuprisingly, on a toy model everything works rather well. In reality conversion rates are low, data is sparse, dimensionality is high and even the basic assumption “good lead means similar to what has worked in the past” is questionable. But you have to start somewhere.

For more information about the ML aspect of classification without negatives google the term “PU learning”.

* this is arguably the hardest and most important step, but I’m glossing over it as it’s not relevant to this post

** if there is prior knowledge regarding how the contacted companies were chosen, it can be easily incorporated